A few weeks ago, when we were on Safari in South Africa at the Garden Route Game Lodge with the boys, I posted on my facebook page the following video of a sexually frustrated Rhino taking out on our Jeep after his 3 female friends repeatedly rejected his advances.

We had followed this male Rhino, who had adorned himself with a coat of attractive orange mug, all the way from the lower plains to this area.  His purpose was clear – to court these 3 female Rhinos quietly grazing.  Our guide explained that they suspected that one of the adult females was already pregnant, the smallest one was still a juvenile and too young to mate, which left the third adult female (the one at the front in the photo below). Apparently, she was not too impressed with him and didn’t want to mate. 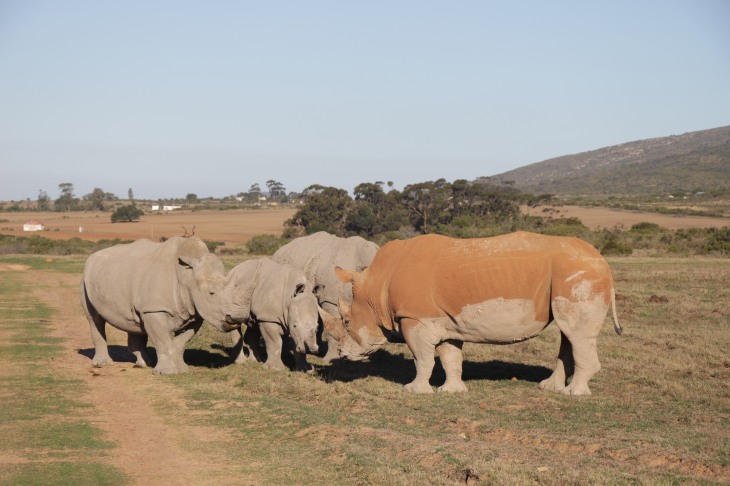 After a number of failed attempts, perhaps the male Rhino was very upset that we were all there watching him being humiliated!

Since then, we have received a video from fellow guests who filmed our encounter with the angry Rhino from their nearby Jeep.  It seemed much safer from afar!!!  It also captured how close the Rhino really got to our Jeep!!!   If his horn got under the bonnet or the vehicle, he could have easily flipped the entire Jeep over!!  Yikes, what a close shave!!

The boys of course thought it was the funniest and most exciting part of our African adventure!  Jayden even shouted “Again!” after the Rhino walked away in the end.

Our brave and calm guide, Tracey, who handled our Jeep with exceptional expertise, nervously laughed and replied “No, I don’t think so!”

Hong Kong is a “closed” city, in the sense that if we wish to leave the city, we will need to leave through immigration checkpoints. There is no “driving holiday” per se – you may leave via the Airport, the Ferry/Cruise Terminals or the Train / Road (that crosses over to China from the north of the city).

For us, our boys have traveled enough times to know that going on holidays means, going to the Airport!