It was not until last week, that I, as a Mommy, truly appreciated the significance and power of Santa.

Last week, we took the boys to visit Santa and to take our annual obligatory family photo with him.  Luckily, the mall was not so crowded in the early evening so the staff and Santa were relaxed, chatty and in a general jolly good mood!

The boys were super excited and as soon as they saw him, Joshie started yapping away, telling Santa what a good boy he’s been, what he’s been up to and what he’s looking forward to.  Jayden was a little tentative at first, but relaxed after seeing his friendly brother having a good old yarn with Santa.  He then also chipped in reporting how good a boy he has been this past year.

Santa seemed to enjoy the boys, the three of them laughing and chatting way!  To their delight, Santa offered to pose for more photos, this time, with just him and the boys together.  Once all the photos have been taken, Santa turned to Joshie and Jayden and said in a stern serious voice:  “Boys, you need to remember very carefully three things.”

Joshie looked intensely at Santa, and Jayden looked a little apprehensive at the change of tone.  Santa looked them in the eyes and continued: “No more fighting you two, okay?”

The two little sets of eyes flickered, the little guilty expressions gave it away.  Then, the two little guys let out a meek “yes” in agreement to Santa’s question.

But Santa was not finished:  “Also, remember to brush your teeth, and listen to your Mommy! Okay?”

I could see the two little heads nod in unison, their eye fixed at Santa absorbing every word he said.

Having had a good talking to, the boys seemed glad it was over.  They smiled, raised their hands and gave a few high fives to their new cuddly bearded best friend!

When we have said all our goodbyes and Joshie and Jayden have exited Santa’s House, I approached Santa, shook his hand and thanked him wholeheartedly for doing us such a huge favor!

That evening, we reinforced Santa’s 3 edicts by reminding the boys what Santa said and the consequences of not listening to Santa.   The messages were absolutely taken to heart as we had the smoothest brushing of teeth and going to bed in the history of our household!

A few nights later, I wrapped a whole pile of presents and put them under our Christmas Tree.  In the morning, Joshie and Jayden noticed the additional wrapped gifts and jumped up and down in obvious excitement:  “Santa was here last night!  Santa came and left us more presents!”  Joshua exclaimed.

Ever the opportunist, I asked:  “Well, have you guys been fighting??”

“No!”  The boys burst out confidently.

“Have you guys brushed your teeth??”

“Have you been listening to Mommy and Daddy??”

“Good!”  I acknowledged, “Then of course Santa came and put the presents under the tree!!”

It has been 10 days since our Santa visit and it has been amazing!!!  There has been no sibling squabbles, no snatching, no fighting over toys and no tears or angry words to each other!  In fact, they have been very cute, giving each other loving and encouraging words, kind gestures and reminding one another they have to be good boys!

I now declare myself a true believer of Santa, and I am ever so convinced that whoever invented Santa all those years ago must have been a parent!! 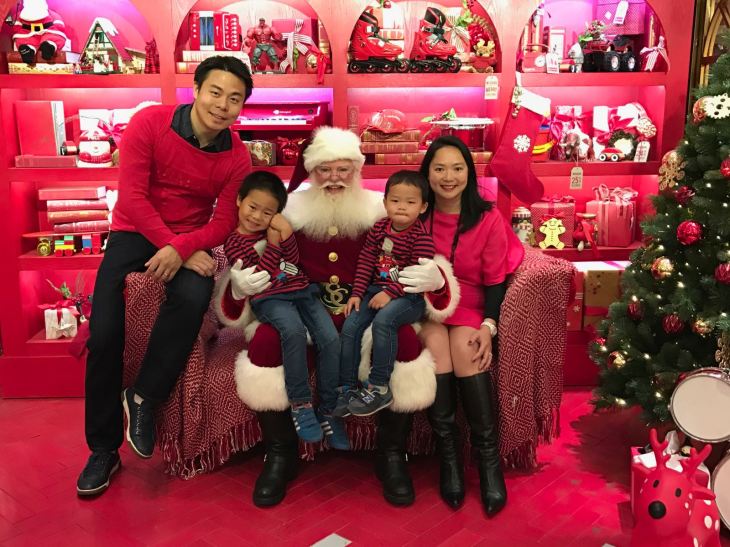 Before this incident, Jeff always asked me when we should break it to the boys that Santa is fictional.  After experiencing what happened this year, my response more ardently will be:

“Can’t you see the power of Santa and what it can do?  Let’s milk it for all its worth (at least for a month or so every year) as long as we can!”

Thanks to all my readers and followers for all your likes, comments and support since I started my blog this year!!  There will be more to come next year!!!

Wishing you all a Merry Christmas and a Fun-filled New Year!